The two most commonly grown coffee bean types are C. arabica and C. robusta. Coffee plants are cultivated in over 70 countries, primarily in the equatorial regions of the Americas, Southeast Asia, the Indian subcontinent, and Africa. As of 2018, Brazil was the leading grower of coffee beans, producing 35% of the world’s total. Coffee is a major export commodity as the leading legal agricultural export for numerous countries. It is one of the most valuable commodities exported by developing countries. Green, unroasted coffee is the most traded agricultural commodity and one of the most traded commodities overall, second only to petroleum. Despite the sales of coffee reaching billions of dollars, those producing the beans are disproportionately living in poverty. Critics also point to the coffee industry’s negative impact on the environment and the clearing of land for coffee-growing and water use. The environmental costs and wage disparity of farmers are causing the market for fair trade and organic coffee to expand.

The word coffee entered the English language in 1582 via the Dutch koffie, borrowed from the Ottoman Turkish kahve (قهوه), borrowed in turn from the Arabic qahwah (قَهْوَة).The Arabic word qahwah was traditionally held to refer to a type of wine whose etymology is given by Arab lexicographers as deriving from the verb قَهِيَ qahiya, ‘to lack hunger’, about the drink’s reputation as an appetite suppressant. This Arabic root is also cognate with the Hebrew root k-h-h (כהה), which means “smoky” and “matte”.

The term coffee pot dates from 1705. The expression coffee break was first attested in 1952.

Processing
Coffee berries and their seeds undergo several processes before they become the familiar roasted coffee. Berries have been traditionally selectively picked by hand; a labor-intensive method, it involves the selection of only the berries at the peak of ripeness. More commonly, crops are strip picked, where all berries are harvested simultaneously regardless of ripeness by person or machine. After picking, green coffee is processed by one of two types of method—a dry process type method which is often simpler and less labor-intensive, and a wet process type method, which incorporates batch fermentation, and uses larger amounts of water in the process and often yields a milder coffee. Then they are sorted by ripeness and color, and most often the flesh of the berry is removed, usually by machine, and the seeds are fermented to remove the slimy layer of mucilage still present on the seed. When the fermentation is finished, the seeds are washed with large quantities of fresh water to remove the fermentation residue, which generates massive amounts of coffee wastewater. Finally, the seeds are dried.

The best (but least used) method of drying coffee is using drying tables. In this method, the pulped and fermented coffee is spread thinly on raised beds, which allows the air to pass on all sides of the coffee, and then the coffee is mixed by hand. In this method, the drying that takes place is more uniform, and fermentation is less likely. Most African coffee is dried in this manner and certain coffee farms around the world are starting to use this traditional method.

Next, the coffee is sorted and labeled as green coffee. Some companies use cylinders to pump in heated air to dry the coffee seeds, though this is generally in places where the humidity is very high. 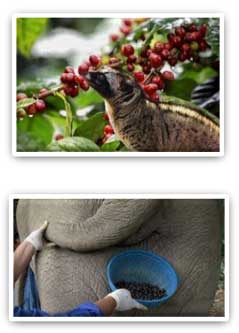 A type of coffee known as kopi luwak undergoes a peculiar process made from coffee berries eaten by the Asian palm civet, passing through its digestive tract, with the beans eventually harvested from feces. Coffee brewed from this process is among the most expensive in the world, Kopi luwak coffee is said to have a uniquely rich, slightly smoky aroma and flavor with hints of chocolate, resulting from the action of digestive enzymes breaking down bean proteins to facilitate partial fermentation.

In Thailand, black ivory coffee beans are fed to elephants whose digestive enzymes reduce the bitter taste of beans collected from dung. These beans sell for up to $1,100 a kilogram ($500 per lb), achieving the world’s most expensive coffee, three times costlier than palm civet coffee beans.

Coffee is among the most common source of caffeine. The caffeine content of coffee can vary considerably depending on several factors, including the type, the brewing method, and the brand. According to the Dietary Guidelines for Americans, more than 95 percent of adults in the United States consume foods and drinks containing caffeine. On average, U.S. adults consume between 110 and 260 milligrams (mg) of Trusted sources of caffeine per day.

The Food and Drug Administration (FDA)Trusted Source estimate that a typical 8-ounce (oz) cup of coffee contains around 80–100 mg of caffeine. 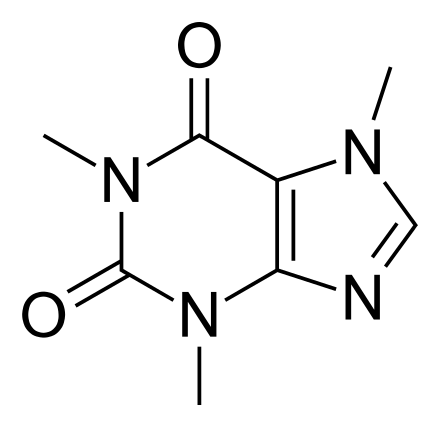 Caffeine is a bitter, white crystalline purine, a methylxanthine alkaloid, and is chemically related to the adenine and guanine bases of deoxyribonucleic acid (DNA) and ribonucleic acid (RNA). It is found in the seeds, fruits, nuts, or leaves of several plants native to Africa, East Asia, and South America, and helps to protect them against herbivores and from the competition by preventing the germination of nearby seeds, as well as encouraging consumption by select animals such as honey bees. The best-known source of caffeine is the coffee bean, the seed of the coffee plant. People may drink beverages containing caffeine to relieve or prevent drowsiness and to improve cognitive performance. To make these drinks, caffeine is extracted by steeping the plant product in water, a process called infusion. Caffeine-containing drinks, such as coffee, tea, and cola, are consumed globally in high volumes. In 2020, almost 10 million tonnes of coffee beans were consumed globally.

Caffeine can have both positive and negative health effects. It can treat and prevent premature infant breathing disorders bronchopulmonary dysplasia of prematurity and apnea of prematurity. Caffeine citrate is on the WHO Model List of Essential Medicines. It may confer a modest protective effect against some diseases, including Parkinson’s disease. Some people experience sleep disruption or anxiety if they consume caffeine, but others show little disturbance. Evidence of a risk during pregnancy is equivocal; some authorities recommend that pregnant women limit caffeine to the equivalent of two cups of coffee per day or less. Caffeine can produce a mild form of drug dependence – associated with withdrawal symptoms such as sleepiness, headache, and irritability – when an individual stops using caffeine after repeated daily intake. Tolerance to the autonomic effects of increased blood pressure and heart rate, and increased urine output, develop with chronic use (i.e., these symptoms become less pronounced or do not occur following consistent use).

Caffeine is classified by the US Food and Drug Administration as generally recognized as safe (GRAS). Toxic doses, over 10 grams per day for an adult, are much higher than the typical dose of under 500 milligrams per day The European Food Safety Authority reported that up to 400 mg of caffeine per day (around 5.7 mg/kg of body mass per day) does not raise safety concerns for non-pregnant adults, while intakes up to 200 mg per day for pregnant and lactating women do not raise safety concerns for the fetus or the breast-fed infants. A cup of coffee contains 80–175 mg of caffeine, depending on what “bean” (seed) is used, how it is roasted (darker roasts have less caffeine), and how it is prepared (e.g., drip, percolation, or espresso). Thus it requires roughly 50–100 ordinary cups of coffee to reach the toxic dose. However, pure powdered caffeine, which is available as a dietary supplement, can be lethal in tablespoon-sized amounts. 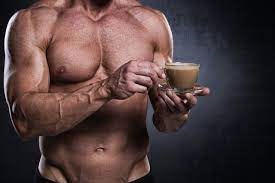 Enhancing performance
Cognitive
Caffeine is a central nervous system stimulant that may reduce fatigue and drowsiness. At normal doses, caffeine has variable effects on learning and memory, but it generally improves reaction time, wakefulness, concentration, and motor coordination. The amount of caffeine needed to produce these effects varies from person to person, depending on body size and degree of tolerance. The desired effects arise approximately one hour after consumption, and the desired effects of a moderate dose usually subside after about three or four hours.

Caffeine can delay or prevent sleep and improves task performance during sleep deprivation. Shift workers who use caffeine make fewer mistakes that could result from drowsiness.

Caffeine in a dose-dependent manner increases alertness in both fatigued and normal individuals.

A systematic review and meta-analysis from 2014 found that concurrent caffeine and l-theanine use has synergistic psychoactive effects that promote alertness, attention, and task switching;[ these effects are most pronounced during the first-hour post-dose. 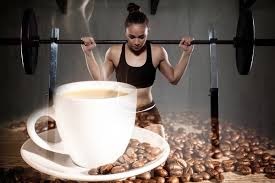 Caffeine improves muscular strength and power and may enhance muscular endurance. Caffeine also enhances performance on anaerobic tests. Caffeine consumption before constant load exercise is associated with reduced perceived exertion. While this effect is not present during exercise-to-exhaustion exercise, performance is significantly enhanced. This is congruent with caffeine reducing perceived exertion because exercise-to-exhaustion should end at the same point of fatigue. Caffeine also improves power output and reduces time to completion in aerobic time trials, an effect positively (but not exclusively) associated with longer-duration exercise.